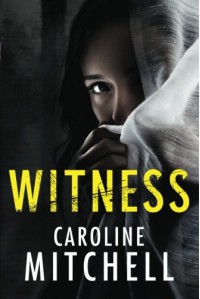 To Rebecca it was a brave decision that led to her freedom from domestic abuse. To Solomon it was the ultimate betrayal. It’s been ten years since Rebecca’s testimony saw Solomon locked away. Enough time for the nightmares to recede, the nerves to relax; enough time to rebuild her life and put the past behind her. Then one day a phone rings in her bedroom—but it’s not her phone. Solomon has been in her home, and has a very simple message for her: for each of the ten years he has spent in jail, Rebecca must witness a crime. And, to make matters worse, she has to choose the victims. Fail to respond and you get hurt. Talk to police and you die. Ready to play? You have sixty seconds to decide. As the crimes grow more severe, the victims closer to home, Rebecca is forced to confront a past she had hoped was gone forever.

This book starts simply enough with one phone call. From that moment on, Caroline Mitchell's deliciously dark words seemed to weave a magical spell as I was unable to stop reading until I'd followed Rebecca to witness each horrific crime until the last one loomed large in front of me. This stand alone thriller is my first read of Caroline Mitchell's that doesn't feature police procedural and I really like the difference. Soloman's planned manipulation of Rebecca is chilling. It really made me stop and think. The story is gripping, thrilling and mesmerising, with characters that get right under your skin. Rebecca is strong yet flawed and vulnerable; Soloman is evil but also a victim of a difficult childhood, so in a way had some of my sympathy. So complicated! What a corker you've written here Ms Mitchell! Thanks to Thomas & Mercer, Netgalley and the author for sending an ARC in return for my unbiased review.